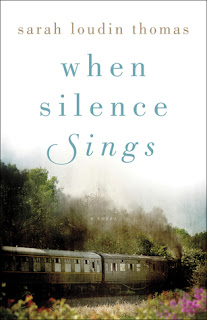 The Harpes and the McLeans have been feuding for generations, so it's no surprise to Colman Harpe that when his cousin is killed by a McLean, the Harpes want vengeance. Colman, an aspiring preacher, tries to remind himself that vengeance is the Lord's and stay out of things, but then he receives an unexpected call from the Lord--to preach to the McLeans. Not sure how to carry out that call, and even sure he wants to, he heads out on a fishing trip instead, only to be stranded in a storm and lost in mountain caves until he emerges in the McLeans' territory, cared for by Ivy, an outsider who encourages him to answer his call to preach to the McLeans.

Serepta McLean, the matriarch of the McLean clan, has worked too hard to gain control of and prosper the family businesses to let anything get in her way. Neither of her two sons quite seems up to scratch to be the next leader of their empire--the elder is too sloppy and the younger too eager to make changes Serepta doesn't approve of. While she needs to tend to business and bringing at least one of her sons up to scratch, when a terrible accident leaves a young girl orphaned, Serepta impulsively takes her in and soon finds that the little girl changes her life way more than she anticipated.

Wow! This book was incredibly well written. I don't know anything about West Virginia in 1930, and yet, Sarah Loudin Thomas brought it to life in such a way that it felt totally familiar to me. I was quickly immersed in the setting as well as the plot. From the get-go, Colman, with his Jonah-like story, just tugged at my heart; I think a lot of readers can relate to feeling like there's something God wants us to do but don't have any idea how to actually do it. I thought that was totally relatable, as was how he felt caught between his family and his own desires for life. Ivy and her uncle, who care for him, were totally endearing as well. As for Serepta, she was a fascinating character, one who does things that are definitely questionable but who also does good things. She, along with other characters, definitely make for an interesting discussion topic, like what makes someone good or evil, if anyone is past redemption, etc. There's just so much to like about this book--and there's tons to talk about, which makes it a great choice for book clubs. Highly recommend--I'm picking this as one of the best books of 2019!
5 stars!

I read an ARC provided by the publisher via #NetGalley. All opinions are my own.
Posted by Adrienne at 11:34 AM